Back to the Future Day feels like the distant past.

What we're reading this week

Adam: Not a new conversation by any means but a good reminder that traditional articles are not necessarily the best way to format and deliver news. And a bonus: what thinking beyond the article could mean for the news/tech ecosystem.

Ben: What if HTML elements could change styles based on the element’s size, not the viewport’s? Marc Schmidt’s CSS Element Queries library is a proof-of-concept. How would you use this functionality?

David: Webfonts have been vital to display crisp icons with small file sizes.This series explores some of the pitfalls.

Ryan: "The problem with calendars is that they are additive rather than subtractive." Every time you add a meeting to the calendar, you’re subtracting an hour from someone's life.

Our guest this week is Meredith Broussard (@merbroussard), who teaches data journalism at the Arthur L. Carter Journalism Institute of New York University.

The most remarkable story I read last week was Adrienne LaFrance’s story “Raiders of the Lost Web” in The Atlantic. Look at this great line from the beginning: “You can't count on the web, okay? It’s unstable. You have to know this.” The piece is beautifully written, and it covers the counterintuitive truth about digital archiving: for years, we’ve been told that the Internet is forever. It’s not. I was excited to see this story because I’ve been involved for the past two years with a group of scholars, journalists, and archivists who are thinking about how to archive the many wonderful, technically complex works of digital journalism that are being created every moment. Coincidentally, the same week, we scholars published a special issue of the Newspaper Research Journal in which we explore the many nuances of how media companies are dealing with or might better deal with the “first draft of history” represented by digital journalism. Software preservation is unexpectedly complicated. As digital journalism evolves, archiving the news starts to look more and more like archiving software. I’m delighted that people are starting to think seriously about how we can effectively preserve innovative journalism.

Religion News Service has an immediate opening for a full-time Web Developer.

The Center for Investigative Reporting is hiring an Editor in Chief for Reveal.

The International Consortium of Investigative Journalists is hiring a server administrator/web developer.

The Data News team at WNYC is hiring an Interaction Designer.

Elsewhere in public radio, WBEZ is hiring a number of new roles on their digital team.

Work we admire by our journalism peers 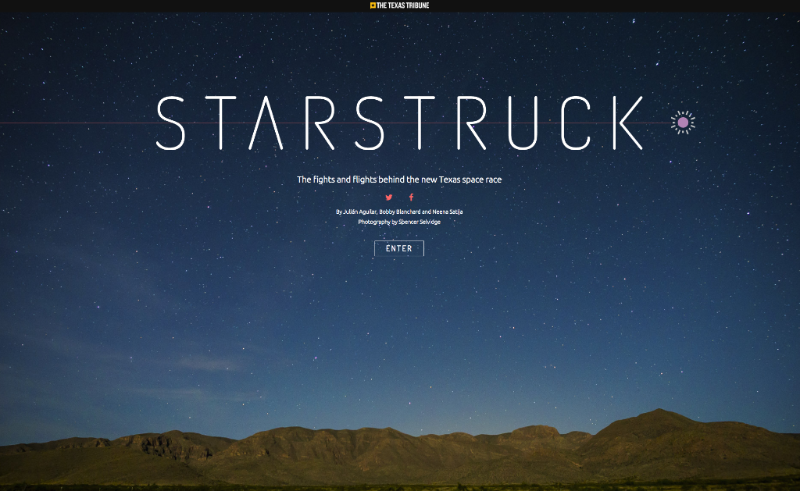 The Texas Tribune takes an immersive look at the new Texas space race.

DRINK: The cocktail at the end of the universe.